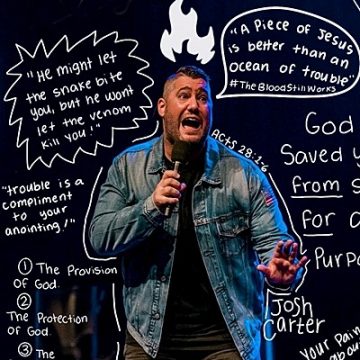 Josh is a Pastor, Evangelist, and Communicator of the Gospel. Bringing an intense, passionate and high energy style Josh is leading a new generation to Christ. He is earmarked by his in your face, revelatory preaching which communicates the deeper truths of God’s word in a clear way. As an evangelist and speaker at various camps and conferences across the country, Josh has been privileged to minister with a diverse group of the country’s best speakers. He currently serves as the Youth Pastor at Calvary Christian Center in Ormond Beach, Florida. Josh has also served two other churches for a total of eight years including his time as Youth/Young Adult Pastor at Surge Student Ministries in Wilson, North Carolina for six years where he saw tremendous numeric and spiritual growth. Now pastoring and traveling full time, Josh is eagerly embracing this new season of pastoring and evangelizing at home and around the world. Josh is married to the love of his life Natasha and they have been married for six years. As a team their goal is to change the world by preaching Gods word.